How to Take Better Pictures

I'm beginning a series of tips and tricks that I'd like to share with everyone to help improve your photography.  Regardless of whether you're a beginner, or an experienced photographer, there are a few hints that I've learned along the way that I'll share with you here.  You'd be surprised how simple some of these things are, but if you keep these in mind, you'll open up a whole new way of seeing, which is really the beginning of seeing picture taking as a form of art, rather than just snapping a frame of "what's happening in front of you."

Rule #1:  Clean up your backgrounds.  People who have seen me working may notice that I may take several frames while crouching, tip-toeing, standing on a chair, or even lying down on the ground.  What I am doing is composing with a clean background in mind.  Many people see their subjects and generally frame them in the center, but most fail to recognize things such as the trash cans, people, cars, or signs that may take away from the overall composition of the photo.  Below is an example from a recent wedding of cleaning up my backgrounds.  I got low and off to the right in order to have Becky - the beautiful bride that day, cover up the "No Smoking" words written on the wall directly behind her.  The angle also contributes to a more dynamic portrait.

Rule #2:  If you're going to use flash, bounce it.  You see all kinds of light modifiers these days, but they all have the same purpose:  to alter the look of the light.  The most common modifiers are made to soften light.  Direct flash often does not look flattering, and often leads to a flat look in photos.  Bouncing the light off a wall or ceiling (I prefer to bounce off the side of a wall, if possible), not only diffuses the light, but it will create more natural shadows along the face that create more dimension.  Below you'll find me bouncing light off the wall to my right.  You'll also notice rule #1 in action, as I've composed Ben so that all the little things like mirrors and water bottles in the foreground aren't creeping into my photo and taking away from the feel of it. 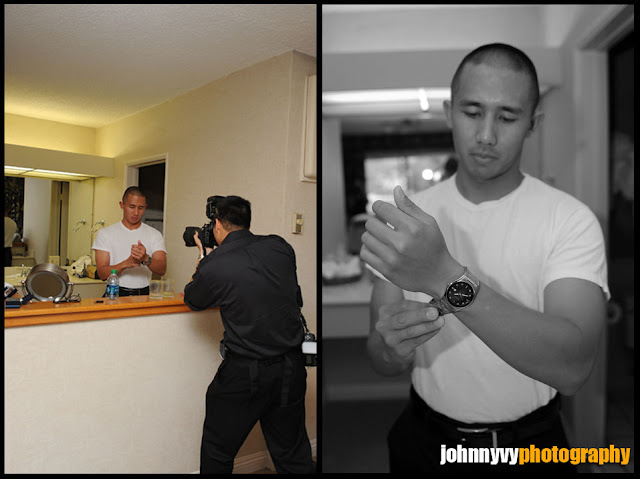 Rule #3:  Look for a different angle.   Most people who take pictures generally frame their subjects in the middle - and will take a horizontal photo most of the time as well.  Many people forget that just turning the camera to a vertical position can change their composition and make it more meaningful.  As a general rule, I tend to do at least a horizontal and a vertical of each portrait.  The first picture below was also shot horizontally but the vertical framing showcases the staircase better.  You may also notice that they are not in the center, also complementing the spiral staircase.  I often take at least 3 different angles of the same pose - from a low, middle, and high position.  There really is a difference in the way they look!  Don't be afraid to move around and try new angles - put your camera on the ground, try an elevated position, or perhaps a camera tilt.  Try framing your subjects to one side of the frame instead of just the center.  There are a variety of simple things that you can do to improve the look of your photos.  Give it a try!