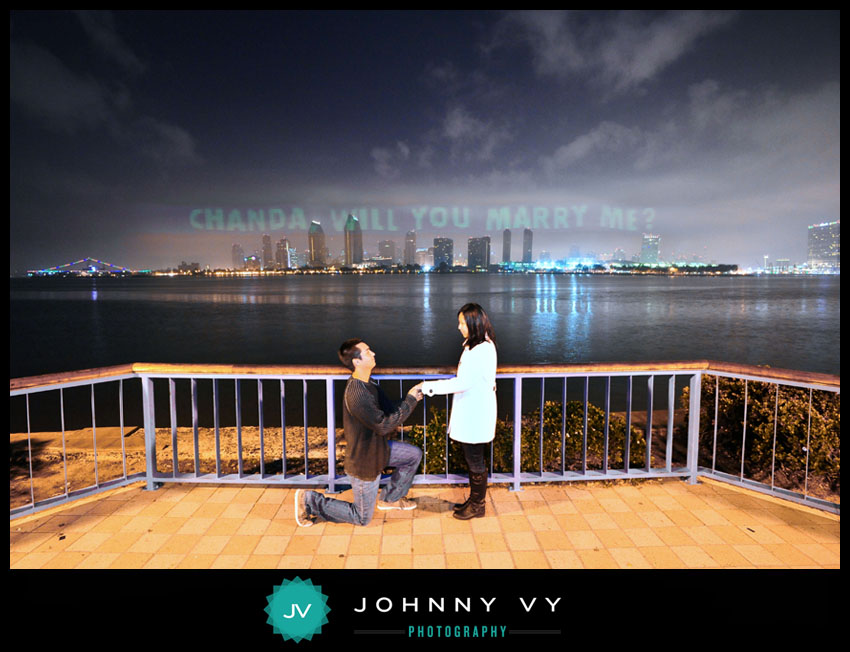 After over 6 years of dating, I finally asked Chanda to marry me!  Before I get into the details, I want to take you back 10 years where we met on the campus of UC San Diego in 2001.  San Diego has been a special city to both of us, and I can speak for both of us when I say that the best years of our lives were spent in that city.  Since graduating college in 2005, we’ve only been back a handful of times but I knew that whenever this moment would happen, it had to be in San Diego.
Since I’m a photographer, knew I wanted to have a picture of the proposal, and I wanted it to be unique and memorable.  I’ve always thought that a light painting proposal would be imaginative and special, especially since it involves photography. If you’re not familiar with the concept of light painting, I explain the concept here.  In fact, it’s really difficult to understand the way the photo was made unless you understand the concept of light painting, so read up before continuing on!
January 2011:  I started conceptualizing the proposal, and knew that I wanted to surprise her with a written proposal when she saw the picture.  I began to practice writing with lights on my bedroom wall.  It wasn’t very neat because I couldn’t really see what I was writing, and the spacing was hard to master.  I also had to begin thinking of special locations in San Diego that would not only make for a great picture, but would also be meaningful.  Over the next several months, I kept experimenting with various lighting tools, with very few pleasing results.  I spent countless nights in the cold trying to work out the logistics of making a clean picture.
April 2011:  I had thought up with the perfect excuse for us to drive down to San Diego.  Believe it or not, during our 4 years in San Diego, neither of us had ever gone to a baseball game, so I suggested that we go watch the Padres at Petco Park.  She liked the idea, so I started looking at the remaining home games.  Unfortunately there were only a handful of games left in the season, and I hadn’t even purchased the ring yet!  That wouldn’t work, so I had to think of another excuse.  First thing’s first though – I had to get the ring!
June 2011:  My sister Virginia had been married last year, and at some point during her ring re-sizing process (she had it resized it like 3 or 4 times I think), Chanda’s ring size casually came up in conversation, and I secretly committed it to memory knowing that I had just obtained the elusive piece of information that would have totally tipped her off if I had to ask.  In the end, I found a ring that I knew she would love.   I learned a lot while shopping for the engagement ring, and shared my insight in my engagement ring guide for guys.
July 2011:  Originally I wanted to propose around her birthday in July, because I wanted to
get her a gift that would take her mind off the expensive thing she had been asking me for all year - during the months leading up to her birthday, she kept saying how much better her favorite game, “Words With Friends” would be on a larger screen (hint hint: “get me an iPad!”), but I kept telling her that it was just too expensive, and that she shouldn’t expect it. Instead I wanted to surprise he with
an engagement ring, which I’m sure she would have loved that more than an iPad.  I already had the ring, and I knew she wouldn’t be disappointed, however I didn’t even have a plan in place yet. I would hold on to the ring for another 5 months,and ended up taking her to Disneyland, where we also had dinner at Blue Bayou restaurant with seats right by the water. I also bought her a Keurig coffee machine for her birthday, which she also loved – just enough to make her forget about the iPad.

Now that I had the ring, I began to experiment with more light painting.  My focus this time was finding the right tool to write with because I just wasn’t happy with my handwriting.  If I was going to make a picture worthy of framing, it had to be nice.  I spent more cold nights in the backyard with various lighting tools - a small LED flashlight, a video light, a laser, an illuminating fan, you name it.  If it emitted light, I tried it, but I was never quite pleased with the final results.
I had remembered seeing a video on YouTube a long time ago (shortly after iPad 1 was introduced) featuring an iPad being used to create 3-D words in mid air.  At the time, I thought that it was a cool use for the iPad, and that it would be a unique way to propose, whenever that would be.  I just didn’t want to have to buy an iPad just for this one purpose, but after many messy attempts, I realized that this would provide me with the most legible way to write with light.  I had my solution.  Now I had to find out whether the technology was available to the masses.  I did an iTunes/App Store search for light writing / light painting and found something called Holo-Paint (At the time of this writing, I discovered a new app called Holographium that does the same thing).  It was a little different than the video I had seen, but it was exactly what I needed.
September 2011:  Since the Padres baseball season was over, football season was starting, and luckily for me, neither of us had ever been to a Chargers game either!  I brought up the idea that we finally go see a game, and she agreed.  After some consideration, I purchased tickets to the December 11 game against the Buffalo Bills.  The proposal weekend had been set.
Light painting needs to be done in the dark, and I have always wanted to take photos of the San Diego skyline at night, so I told her that it would be a great addition to our series of photos that we put up on our walls.  She also thought it was a good idea that we wouldn’t have to wake up early to drive down to San Diego for a game and have to drive back the same night.  So we decided it was best to get there Saturday night and make a weekend out of it.  I’d be able to take my night photos of the city, and we’d enjoy the game on Sunday and then head home after that.
November 2011:  I had been holding off on getting an iPad for so long, but finally convinced myself that it was going to be my best option for writing out my proposal message.  On top of that, there are a ton of apps that I found helpful for my business, so I finally shelled out the money and came home with an iPad2.  The first thing I did was download the “Words With Friends” game for her (she is a puzzle master), and more importantly, I purchased the Holo-Paint app.  She was happy because she finally had a big screen to play “Words With Friends” on, and I was happy because she was happy!  Not to mention that I now had a legible way to write out the proposal!
Backtrack to September 2011:  The same day I purchased the Chargers tickets, I booked a hotel in Coronado across the bay with great views of the San Diego skyline.  I picked the hotel closest to the water because I knew we would end up having to walk down to the bay in the cold as soon as we checked into the hotel on Saturday night, and I knew it was going to be really cold.  My only chance was to convince her that it was a good idea to walk a block and a half to the water to take photos of some buildings in the middle of the night.  It was also in Coronado in 2005 where we spent a memorable day at Sunday brunch, and I showed her all my favorite spots – one of them being the great view of the San Diego skyline.  It was one of the most memorable days of my life.
December 10, 2011:  On Saturday morning, I packed my camera, tripod, tickets, iPad, and engagement ring into my bag and went to work.  She kept asking me all day what time the game was on Sunday, and I had no idea!  She thought it was odd that I had been looking forward to this game for so long, and yet didn't even know what time it was.  Anyway, I got home around 7, picked up Chanda, and we were off to our beloved city.  Once we got there, we checked into the hotel, got settled, and braved the cold weather to walk down to the water for some light painting!
I set up the tripod, and shot a few frames.  It was really cold, and I got her involved by creating a few light streaks, and posing for a few images in front of the buildings.  After about five minutes, she got really cold and started running laps around the camera to stay warm.  I thought that was pretty funny because she really had no idea what was about to happen.  I set the camera for a double exposure and ran in there with the iPad to create the proposal message.  I told her that I wanted to take a photo of the two of us in front of the city lights, so I had her stand in while I made the settings for the second exposure and pulled the ring out of my pocket.  I hopped in there, got on one knee, and asked her to marry me.
She said yes!! 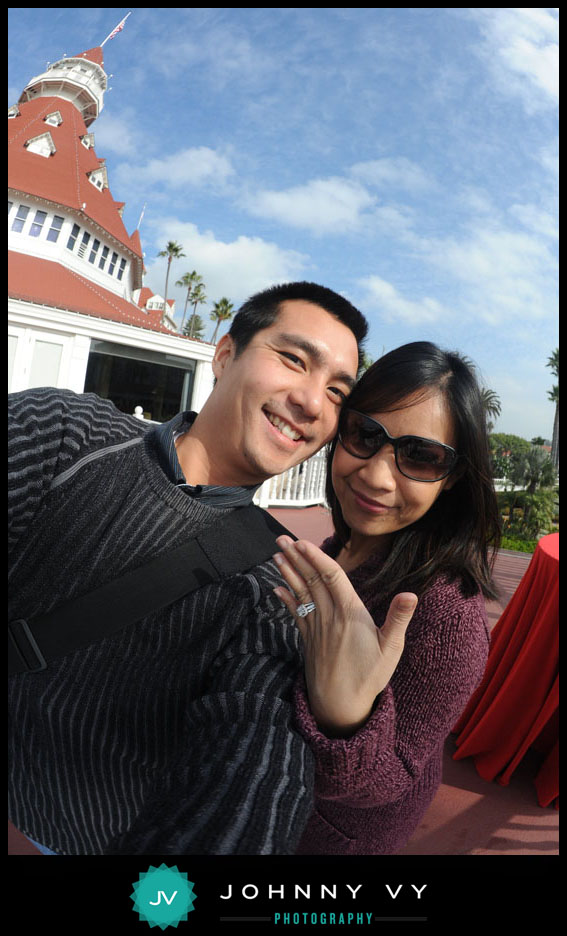