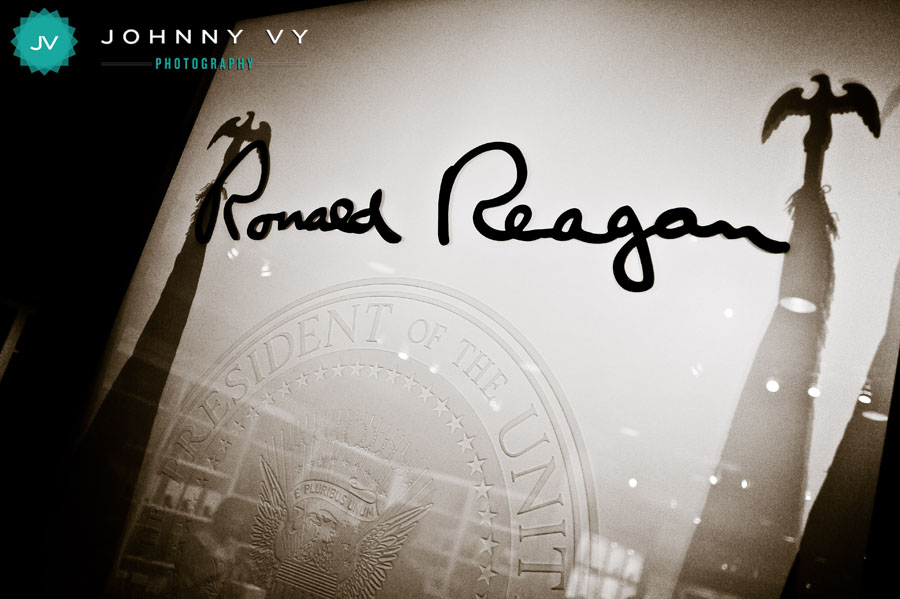 While I was on an elliptical machine at the gym the other day, there was a commercial that came on the tv showing an Abraham Lincoln exhibit at the Ronald Reagan Presidential Library in Simi Valley.  When I got home, I looked into it, and since Chanda teaches a unit on the Civil War in school, we had to go and see it.  Presidential libraries are not literally libraries, but rather as Reagan describes them, "classrooms of democracy," which began during President Franklin D. Roosevelt's second term.  Historically, all the papers and materials accumulated over the previous presidencies were either lost, destroyed, sold for profit, or ruined by poor storage solutions.  On the advice of noted historians and scholars, Roosevelt established a public repository to preserve the evidence of the Presidency for future generations.  As a result, these "libraries" are archives and museums that bring together in one place the documents and artifacts of a President and his administration.

I won't disclose any of my political views but regardless of whether you consider yourself liberal, conservative, or other, Presidential libraries provide a fascinating look into the life of the presidency, and is an awesome learning tool for people of all ages.  In order to get the full experience, you'll need to devote a good 3-4 hours to seeing everything.  There are only 13 Presidential libraries throughout the country, and we are fortunate enough to have 2 here in California, let alone Southern California.  My high school prom (which I never attended) was held at the Nixon Presidential Library in Yorba Linda, and of course, the Ronald Regan Presidential Library is located in Simi Valley.  If you live in Southern California, there is no excuse not to visit these institutions.  I am planning on finally making the trip out to the Nixon Library this summer.

After visiting Reagan's library, I found myself going back and looking up more about his presidency, and his personal life.  If ever there were a real American hero, Ronald Reagan would be it.  I was born during Reagan's first term and I didn't really know anything about the times of the world during the early 1980's, so going back and reading about all the world events kind of gave me an appreciation of the world we live in today.  You can learn all you can in school through textbooks about world history, (and in European History), but seeing real artifacts in real life really piques my interest more so now than ever before.  I have to say that walking through these exhibits ignited a desire to learn in me that has kept me up at night reading up on Presidents and years gone by.  The absolute highlight of this exhibit is the de-comissioned Air Force One aircraft that flew Nixon, Ford, Carter, Reagan, H.W. Bush and W. Bush.  It sits on display in a hangar, and you can actually board it and see what it is like to fly aboard a Presidential plane.  Down below in the hangar lies a Marine 1 helicopter as well.  By and large, presidential libraries can be appreciated by children on a superficial level, but it really is something that is better appreciated by those who lived through the terms of the respective President, like myself during the Reagan years (more so during Bush 1 and Clinton, although I would imagine that I would be equally fascinated by the Presidential Libraries of the other Presidents).  Visiting each of these libraries will be added to my bucket list.

Other highlights of the tour include:
-  Seeing the jacket that President Reagan wore during the assassination attempt, along with the X-ray
of his chest.
- His mother's bible, on which he placed his palm during both inauguration ceremonies.
- Standing at a podium and watching the text of a speech reflect itself on the monitors flanking the
podium (I have always known what those glass things were for, but this is the first time I have ever
seen them in use first-hand from behind the podium).
-  A full scale replica of the Oval Office, as Reagan had it decorated during his Presidency.  This is just
downright cool.
-  A piece of the Berlin Wall
-  The flag draped over the coffin during the funeral procession
-  A large collection of his belt buckles
-  A love letter from Ronald to Nancy (addressed to St. Valentine)
-  The final resting place of our nation's 40th President. 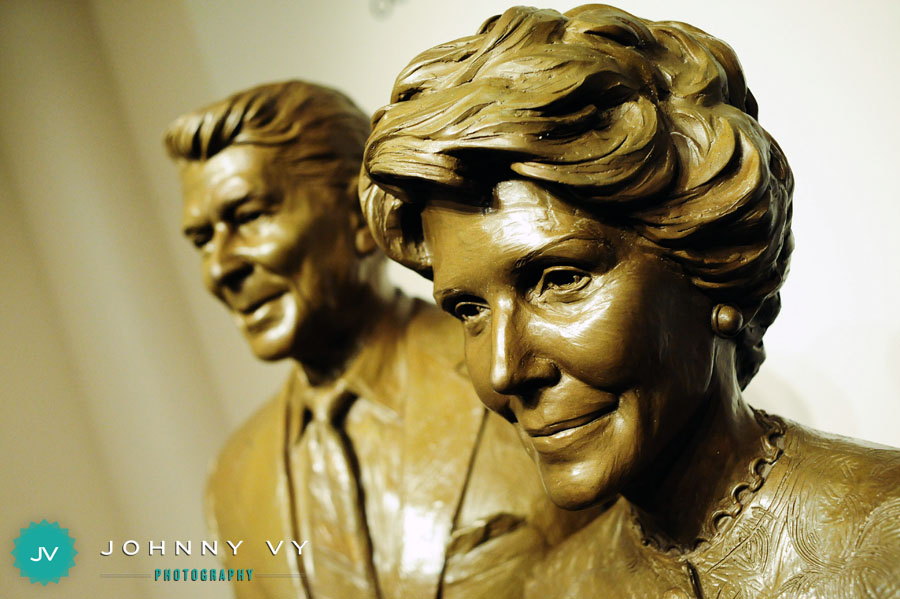 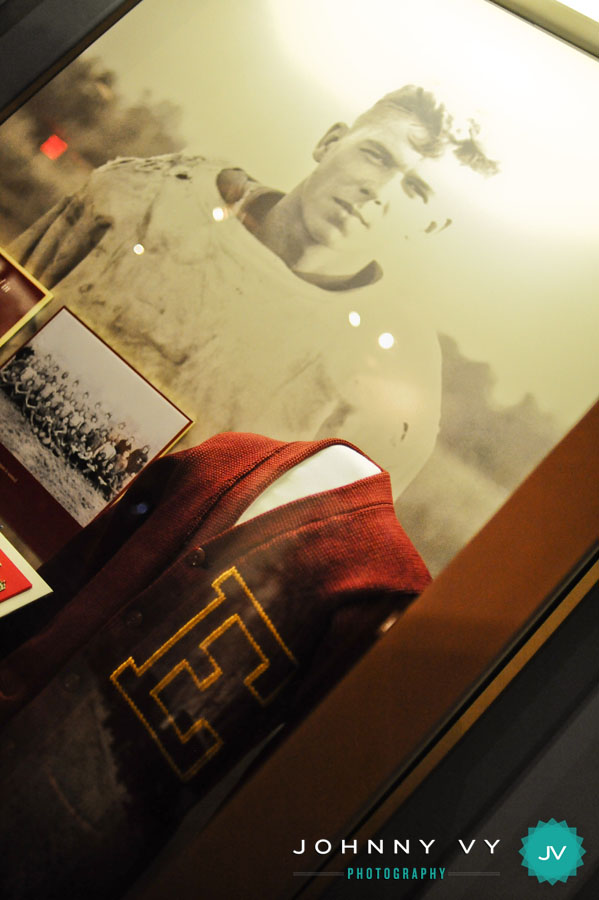 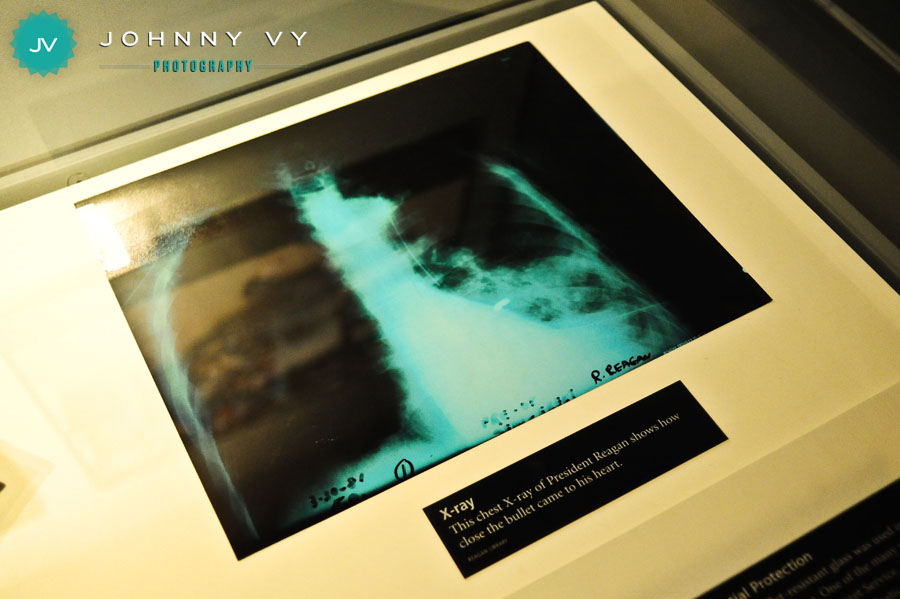 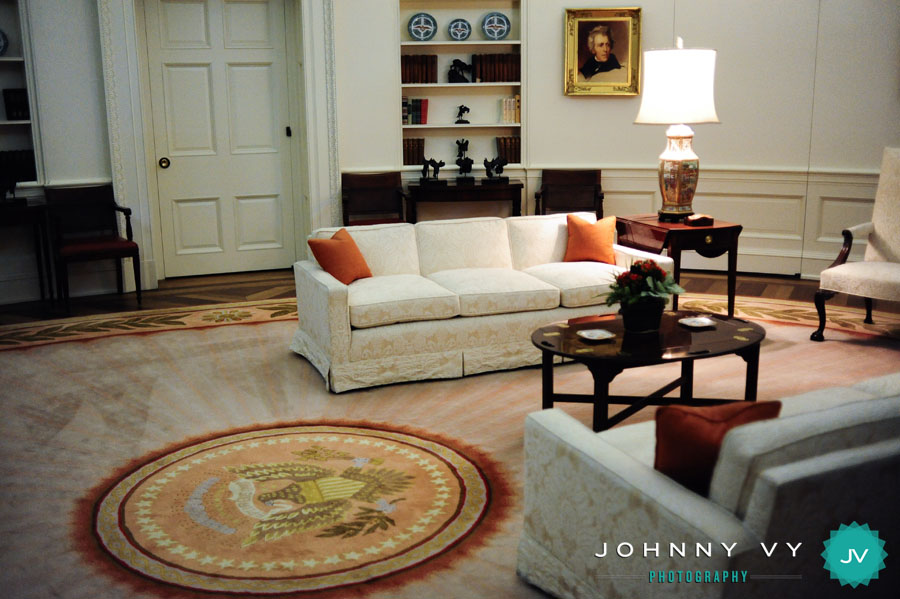 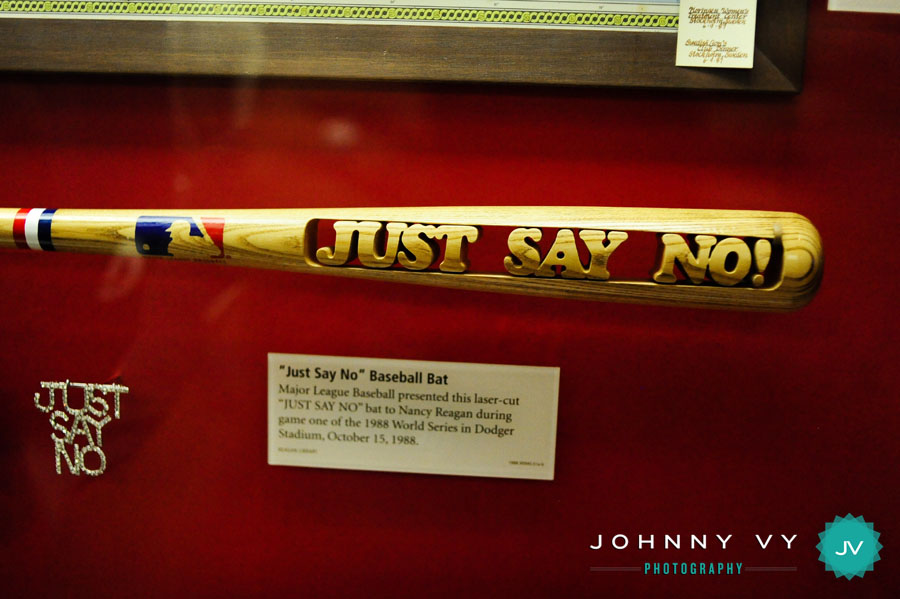 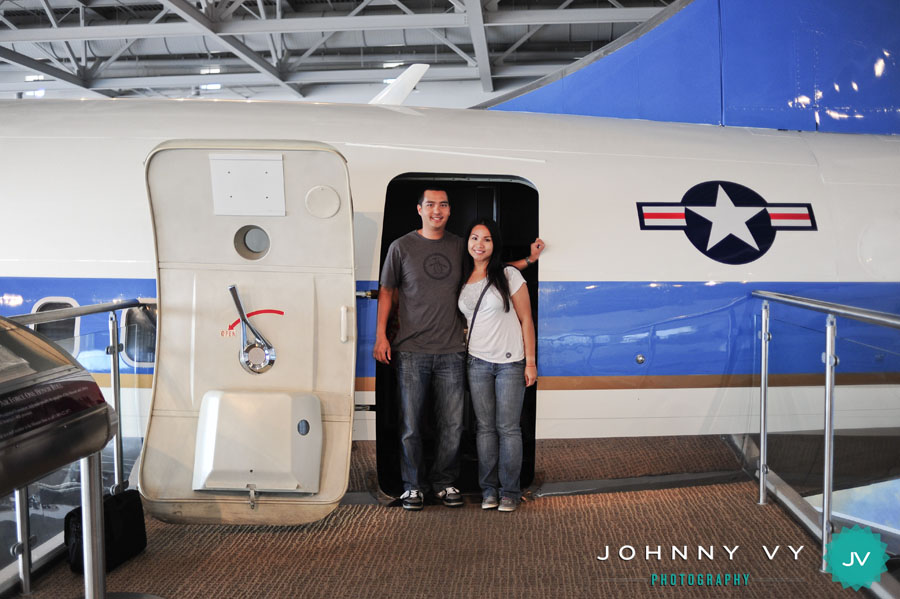 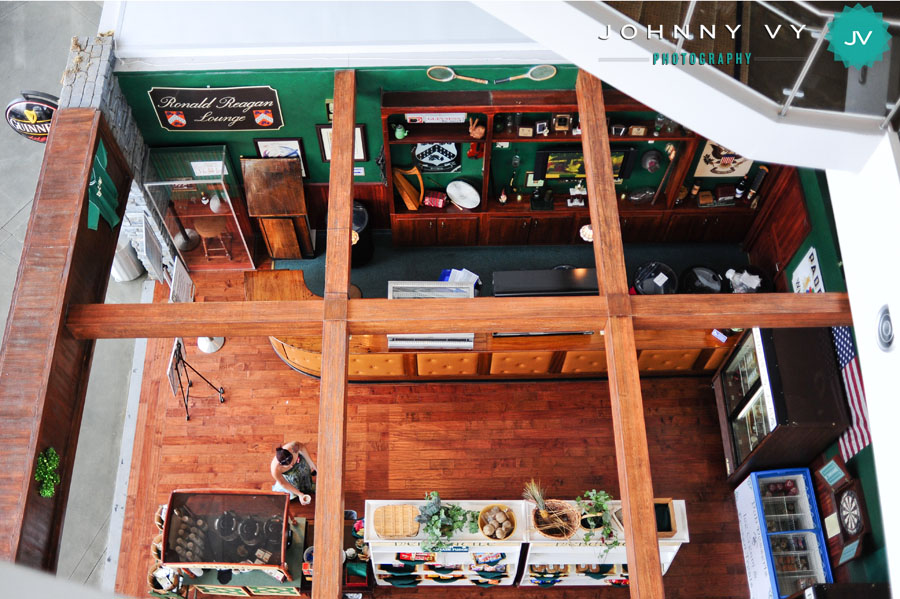 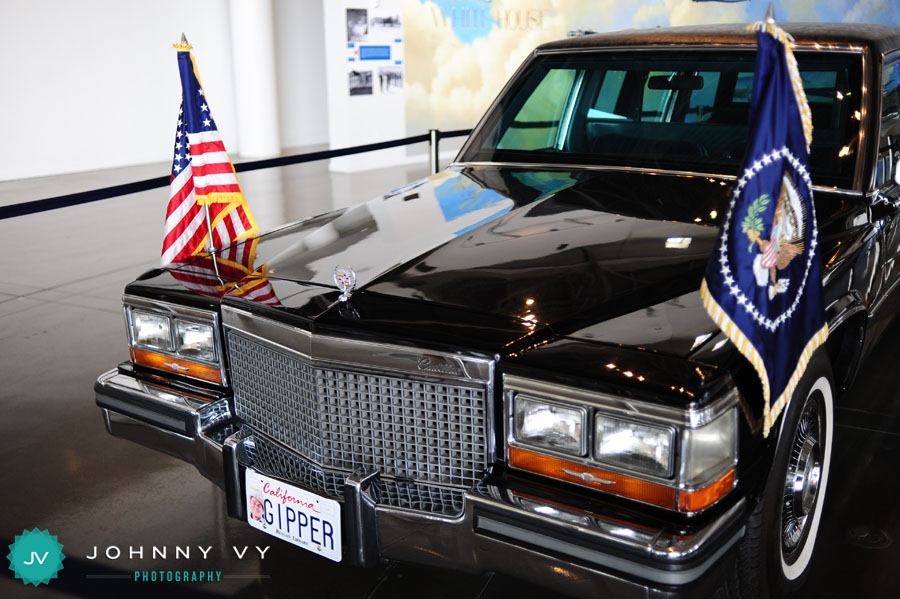 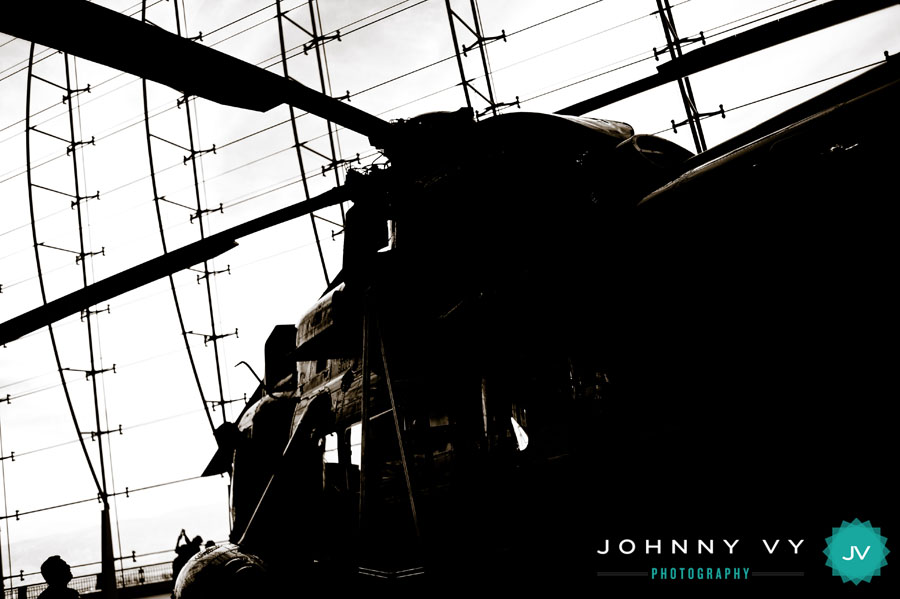 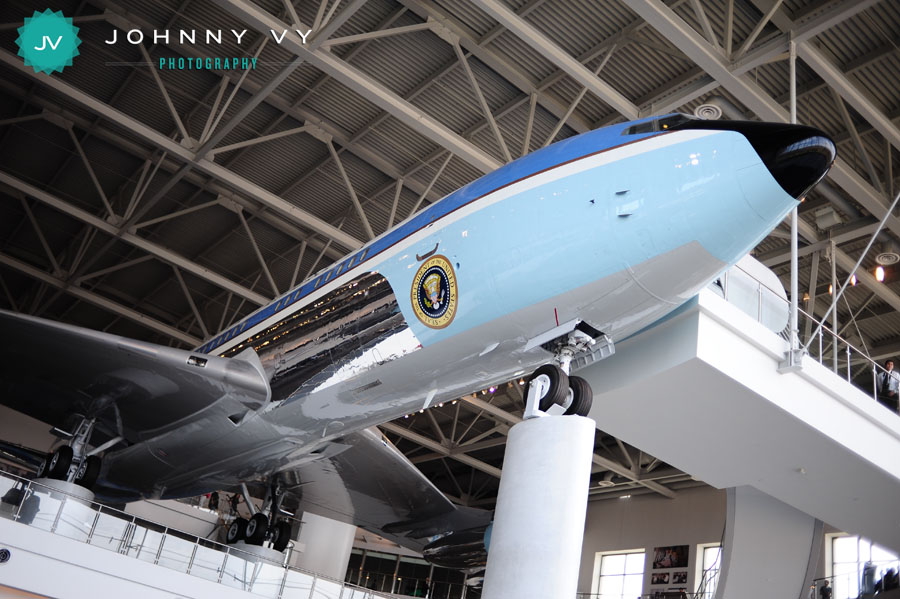 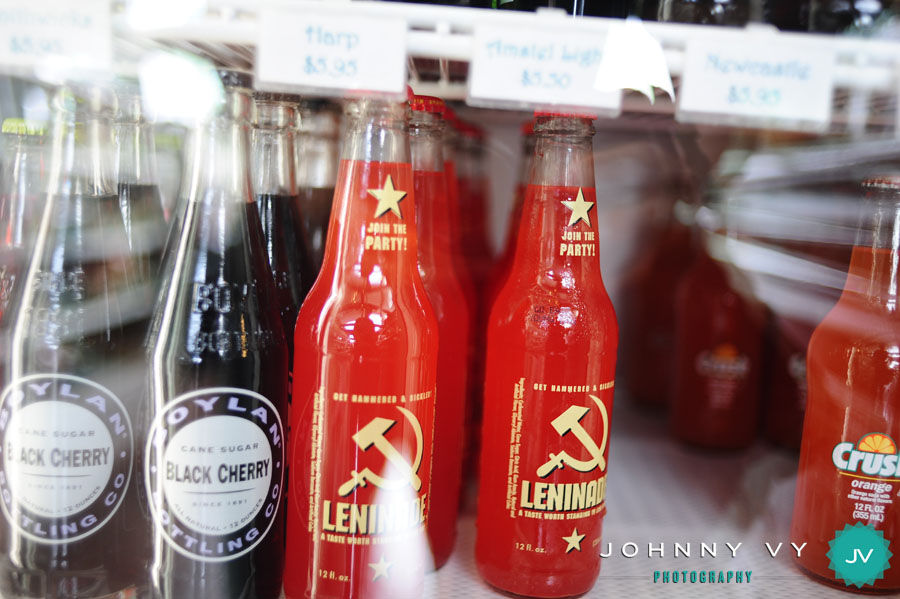 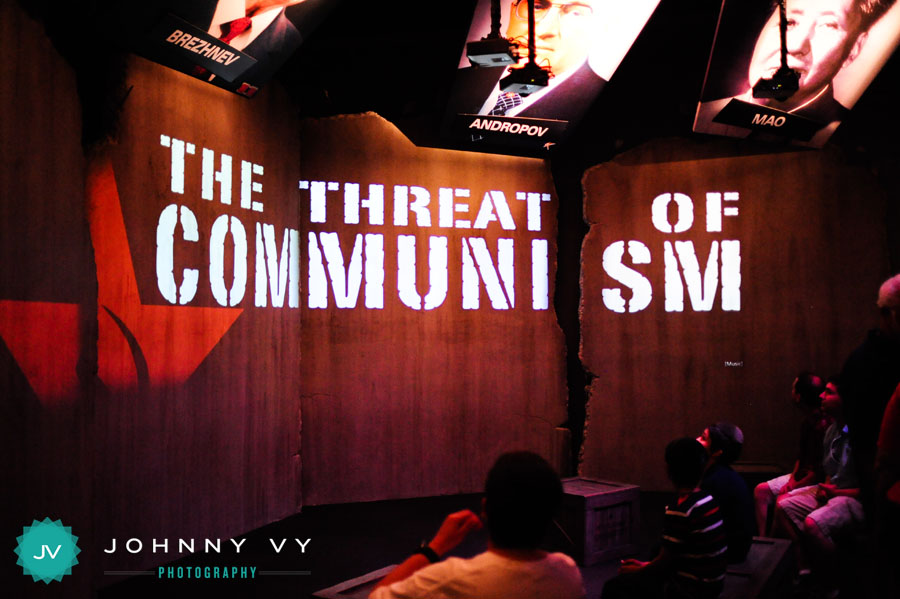 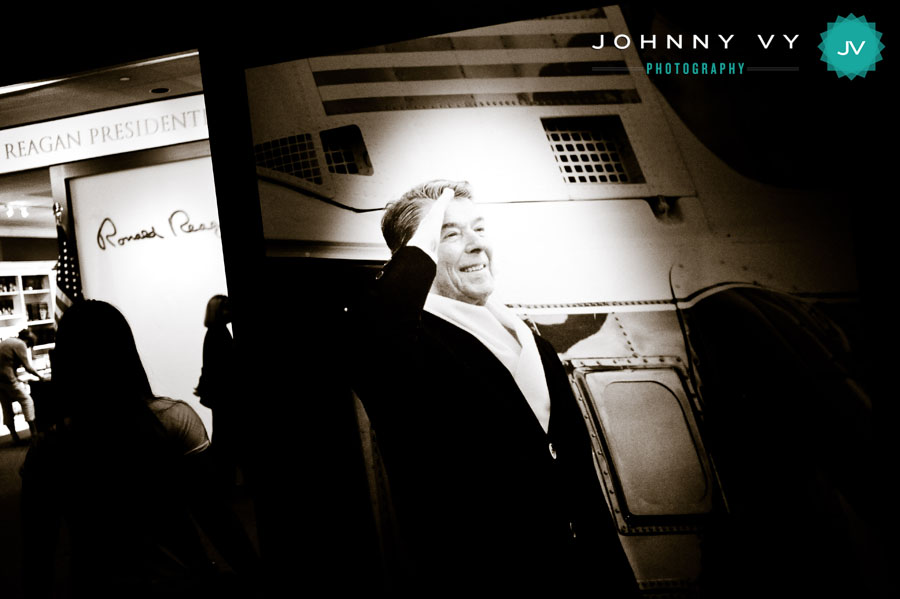 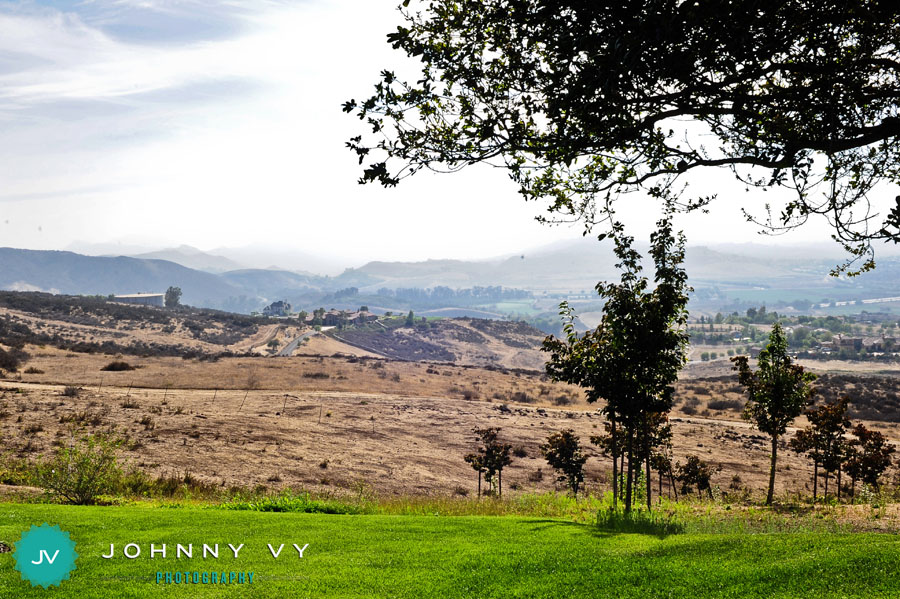 The added bonus of admission to this wonderful Presidential collection is that there is currently a small exhibit on Abraham Lincoln right now.  As far as I know, it is now in its final weeks, so go see it now before it's gone.  We had spent so much time in the Reagan exhibit that we literally had only 10 minutes left to tour the Lincoln exhibit before they closed.  Highlights of this tour include a copy of the Emancipation Proclamation signed by Lincoln himself, and 1 of 3 remaining stovepipe hats that he wore.  We were so short on time that I didn't get a chance to see everything that I wanted to see, including a bloodied pillow from the night of his assassination. 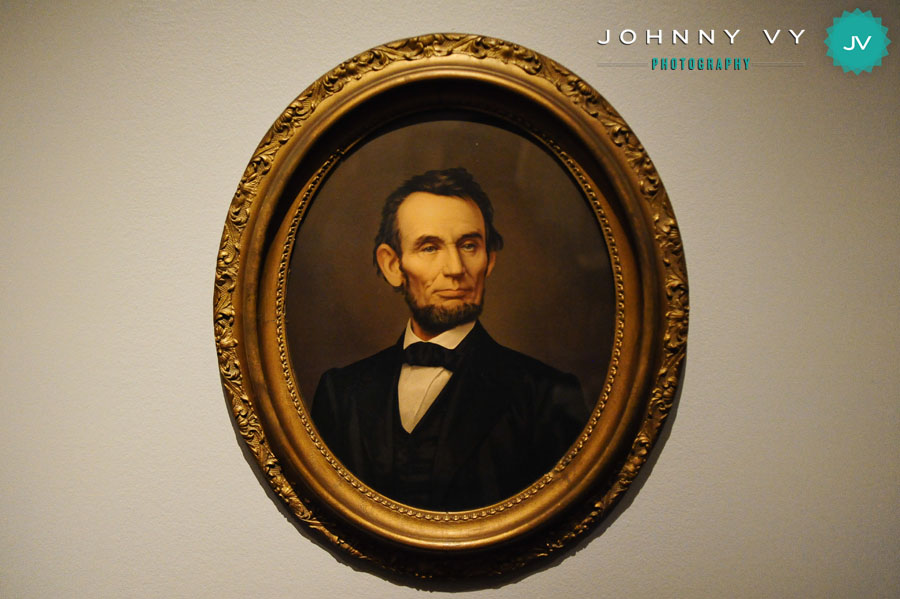 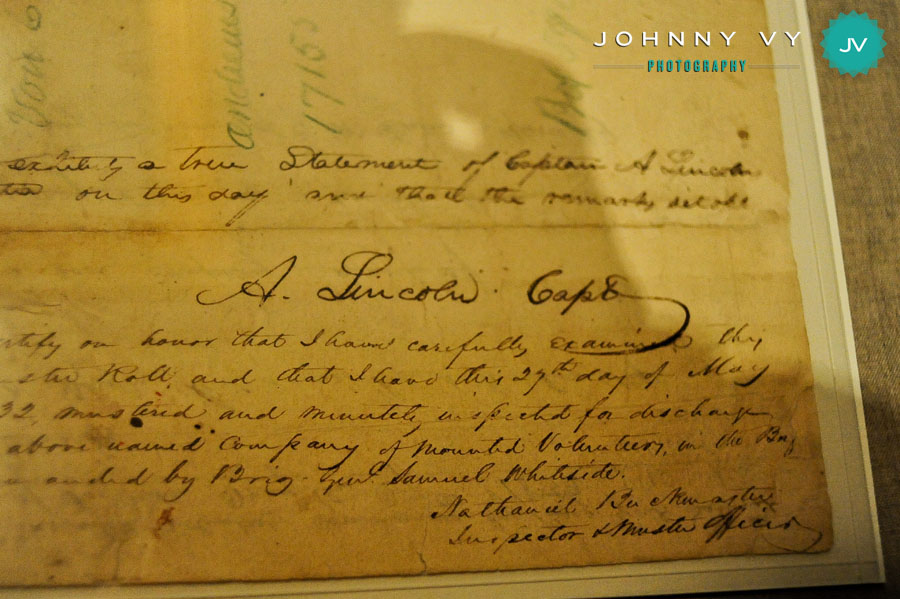 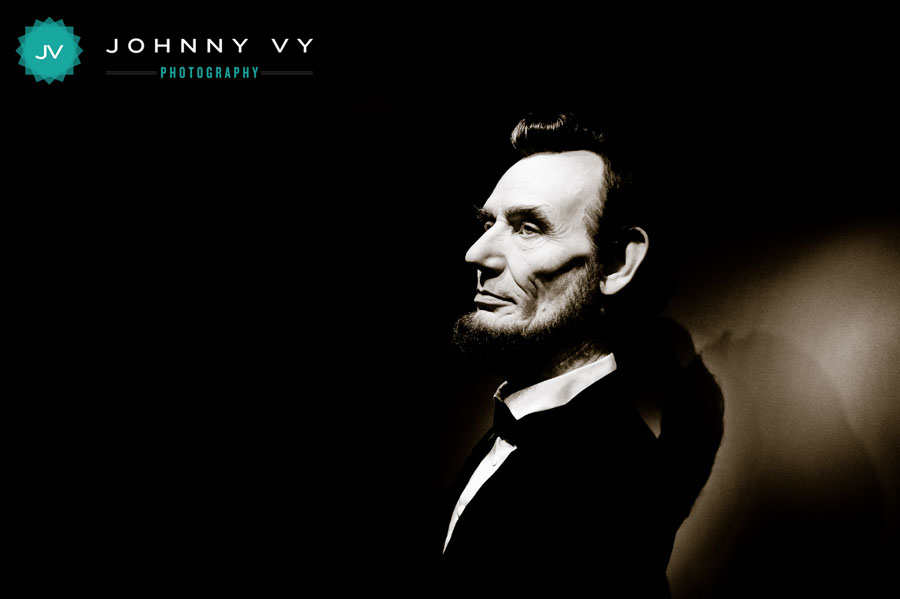 All in all, ever since visiting these exhibits, I've found myself with a newfound desire to learn more about our nation's presidents.  I almost can't wait to have a kid, put him/her through school, and wait till they're about 8, or 18, or 28, and take them here.  The end of the Reagan tour takes you through what he called "the sunset of my life," and there was an older man standing there crying amidst the video clips of news footage reporting his death, and video of tributes from his memorials.  It is something that can be appreciated by anybody who appreciates the spirit of the United States, democracy, freedom, and most importantly, of humankind.
Posted by Johnny Vy Photography