The 2014 NFL Scouting Combine at Lucas Oil Stadium in Indianapolis

For more photos, including some behind-the-scenes images from the Combine, check out my Instagram feed. 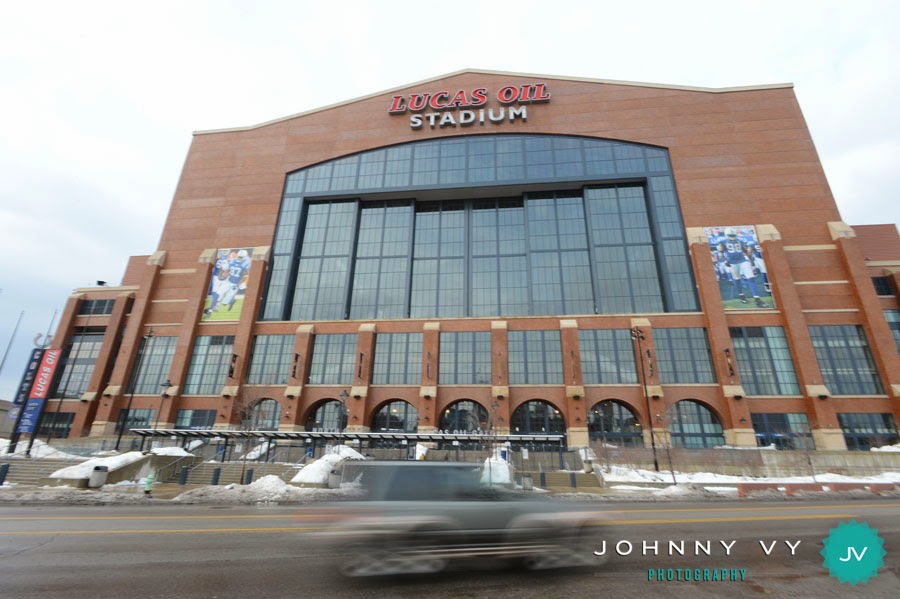 If you asked me early in my career what my dream job in sports would be, I would say it is to travel around with a team as their official photographer (it still is).  I have always enjoyed going around to different cities, living out of hotels, and exploring a city other than the one that I grew up in.  I am not one who gets out much, and I do enjoy getting assignments away from home.  Most people who travel around a lot tell me that it's difficult to have a family life at home, and I find it extremely ironic that I only recently started getting travel assignments for work once I got married and began starting a family of my own with a son on the way.  I'll take it though.

In January, I was sent to the Senior Bowl in Mobile, Alabama.  This month, I was once again sent to the NFL Scouting Combine in Indianapolis.  I did this same trip last year, but had to cut my trip short.  Last year when I landed in Indiana, the temperature was 17 degrees F.  It was cold.  This year, the week was relatively cold, but not overbearing.  When we landed, there was already snow on the ground from the polar vortex the east had experienced a few weeks ago.  There were no snow flurries until the 6th day of the Combine, and we had great weather the second and third days and highs in the 50's, and lows in the 20's.  We lucked out this year and flew home a day before temps would dip below 10 degrees. 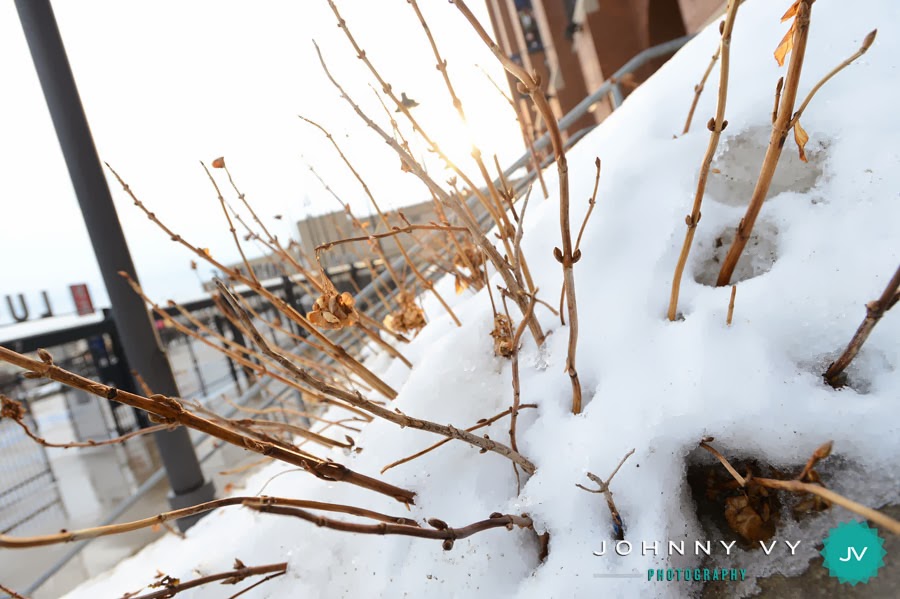 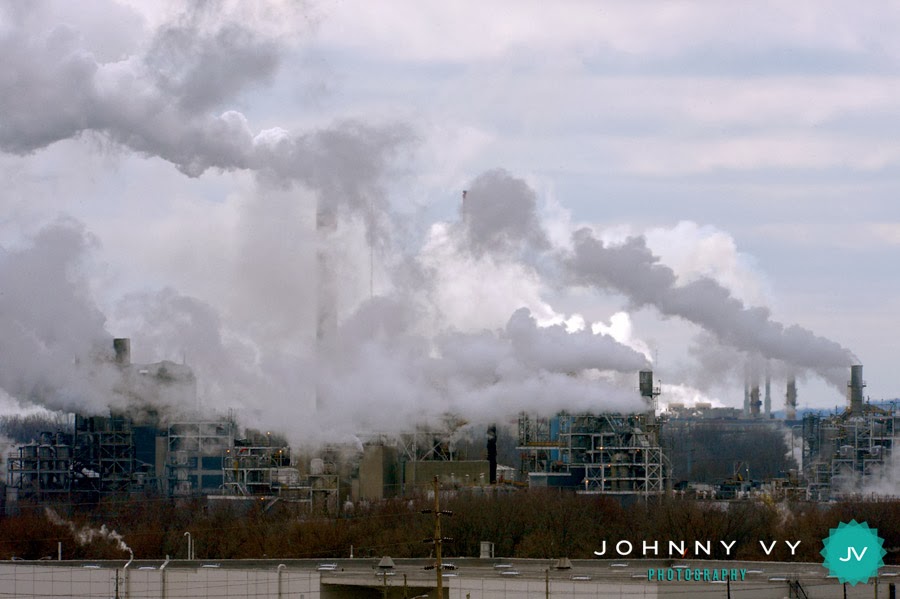 To give you an idea of what the NFL Scouting Combine is like, all the teams come to one city to evaluate the talent in this year's draft class.  It is much easier to have a centralized location for everybody to go to, instead of players and scouts flying around the country to see each other.  About 300 players are in town to be measured, tested, and run through drills designed to expose their weaknesses.  Drafting a prospect is a big business, and with the amount of money teams will be investing in their players, it is important to get all the details - the intangibles that you don't see from watching tape.  We all know what a great Combine performance can do for an NFL prospect.  With that in mind, these young players came to Indianapolis with a business-first mentality.  This was a job interview, and one of the most scrutinizing interviews anybody would ever go through. 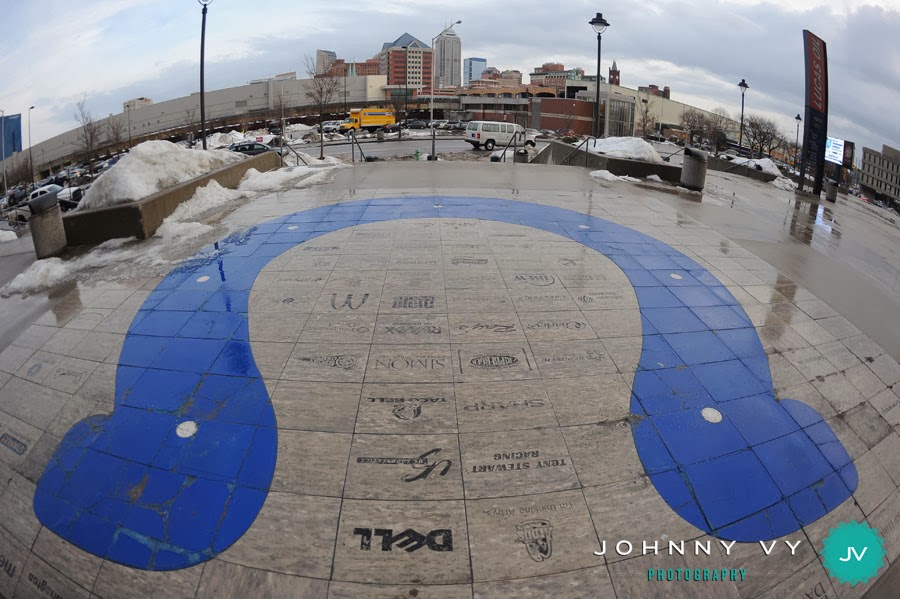 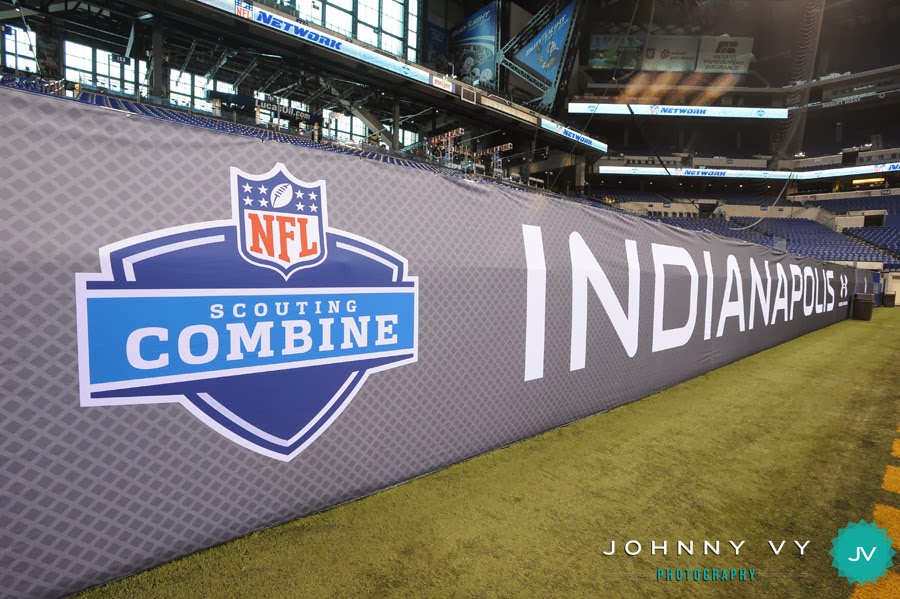 The first two days were spent in the media area photographing interviews with coaches, general managers, and players.  I sat at a table with NFL.com's Around the League team of Gregg Rosenthal, Marc Sessler, Dan Parr, Chris Wesserling, and Chase Goodbread.  There are three main podiums in the media room scattered around, and a bunch of tables where the smaller-named players would sit and speak to reporters.  Last year, the big story was Manti Te'o and the catfish story.  This year provided bigger names all around in every category, including Texas A&M's Johnny Manziel.  The other big story was Missouri's Michael Sam coming out as the first openly gay athlete trying to make an NFL team.  The media scrum would be large for each of these guys.

Over the course of 2 days, I believe I shot over 80 press conferences.  I like doing the pressers because once I get my standard shot of the talking head against a backdrop, I can move around and try to change up the angles and get creative.


For more on Jim Harbaugh's infamous khakis, read this. 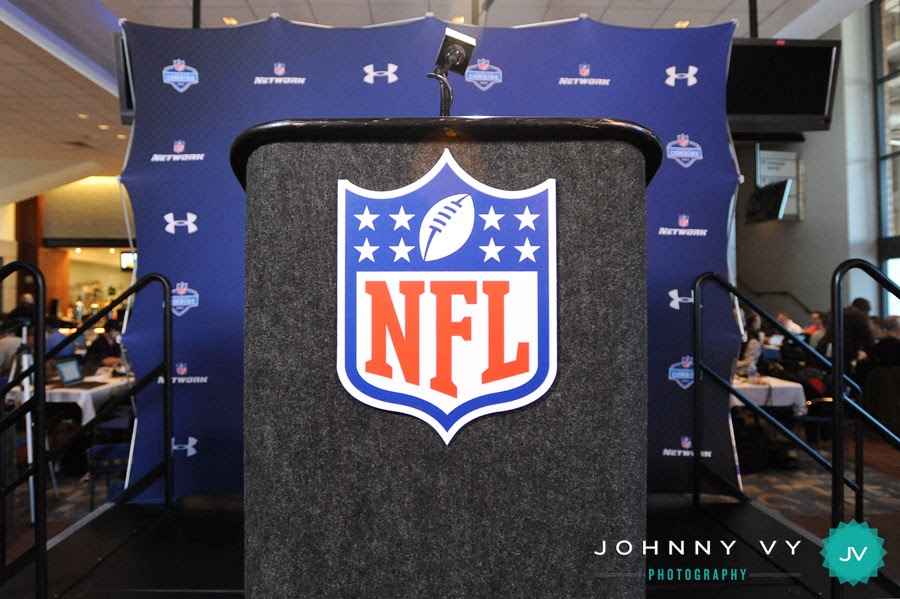 Sometimes it does get hard to move around depending on how large the media scrum is, but overall, I was glad to get out of the media room after two days, and finally start shooting some action on the field. 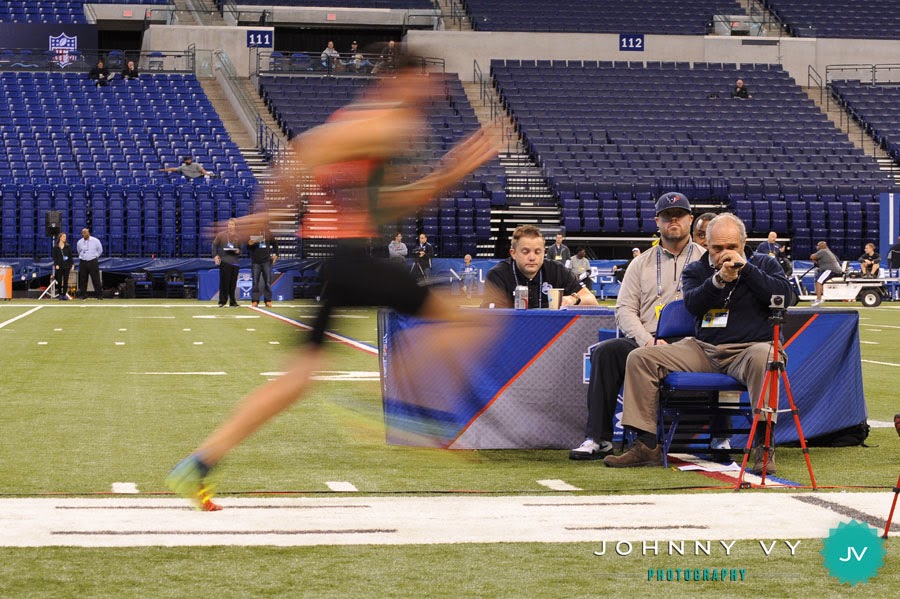 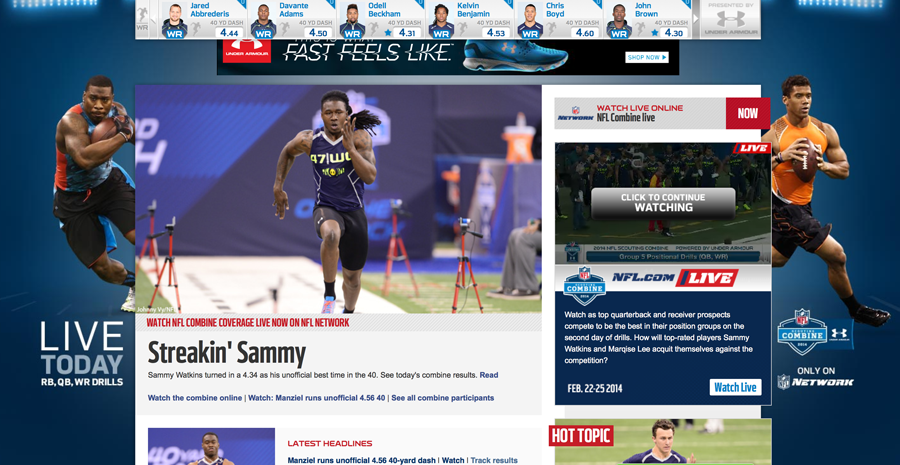 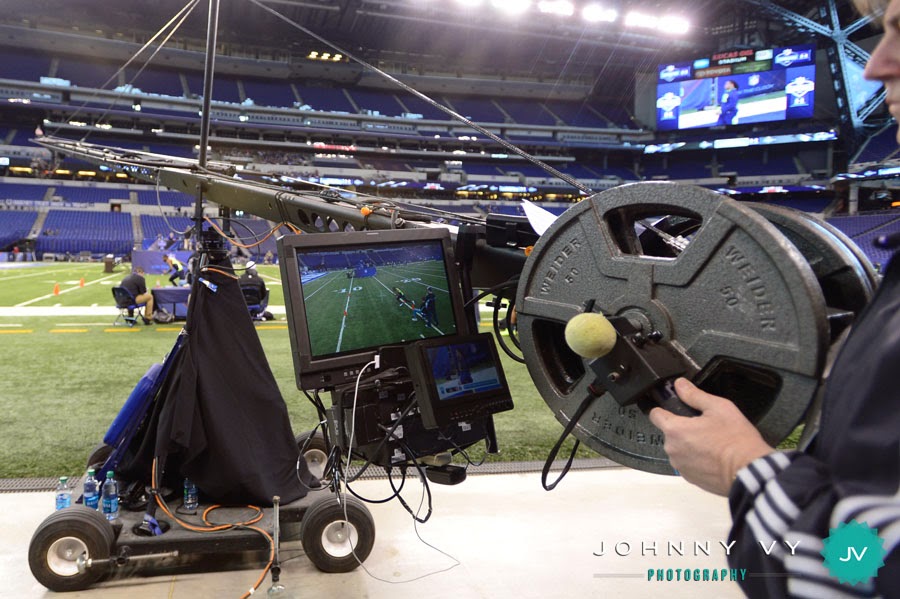 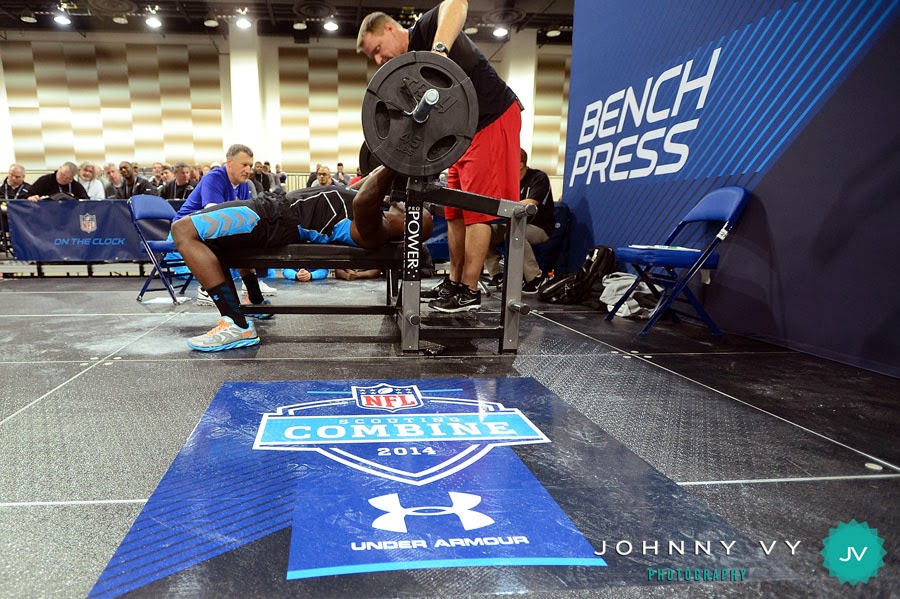 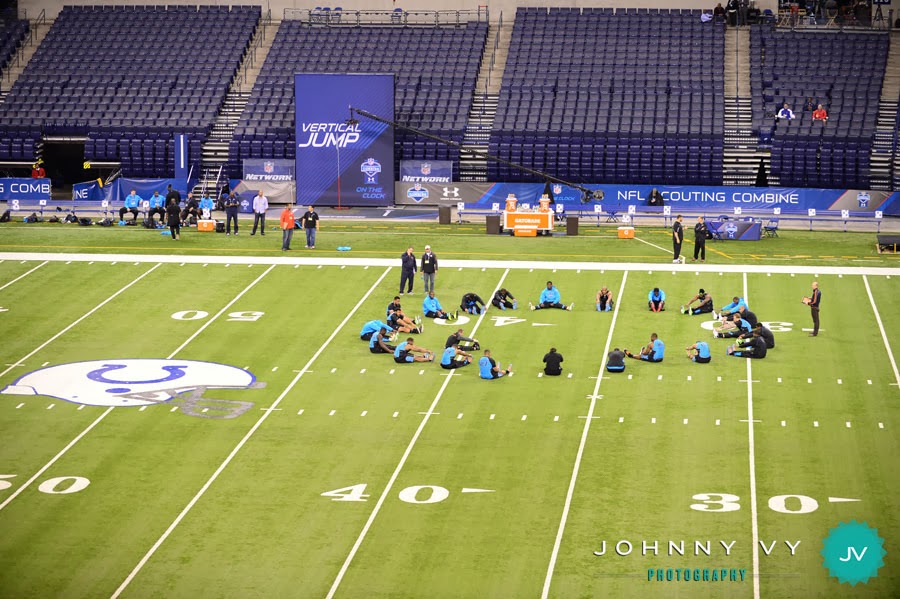 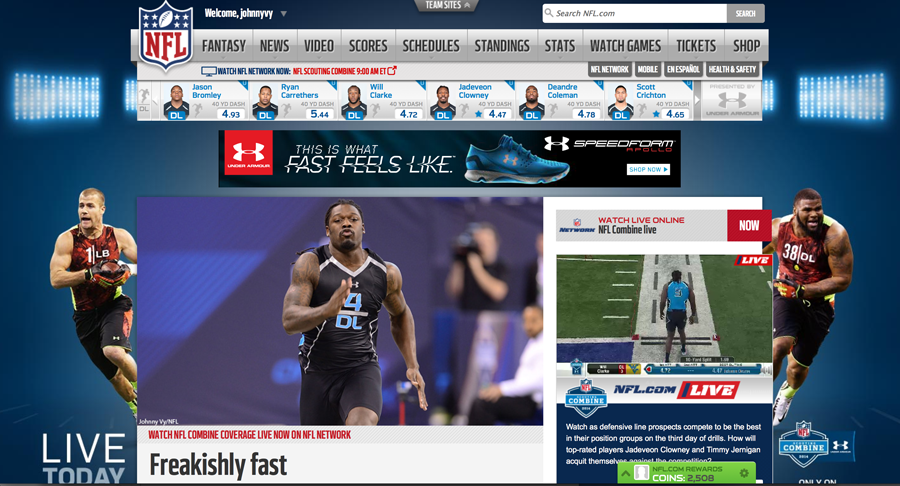 Check out this vicious hit from South Carolina's Jadeveon Clowney, and picture him running right at you.

Jadeveon Clowney is highly regarded as the best player in this year's draft class, and could possibly go number one overall.  Before he got up off the bench to run the 40-yard dash, I heard another player call him back and say, "Hey, go show em.  Leave no doubt."  Surely he did just that. 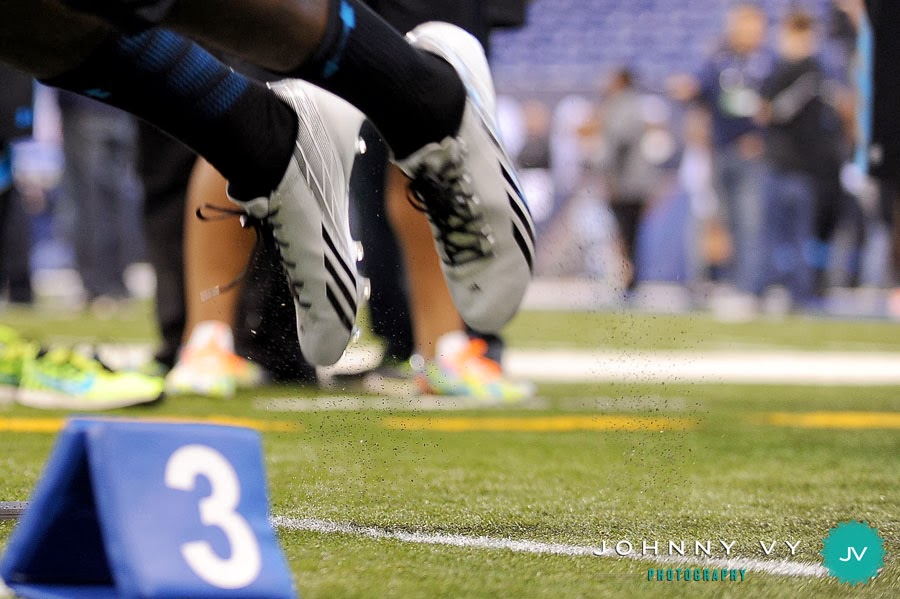 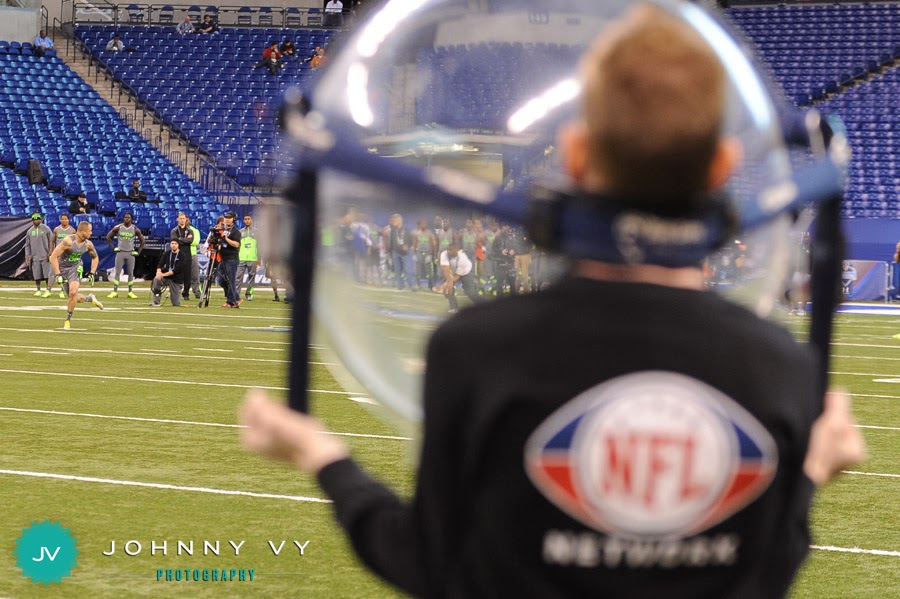 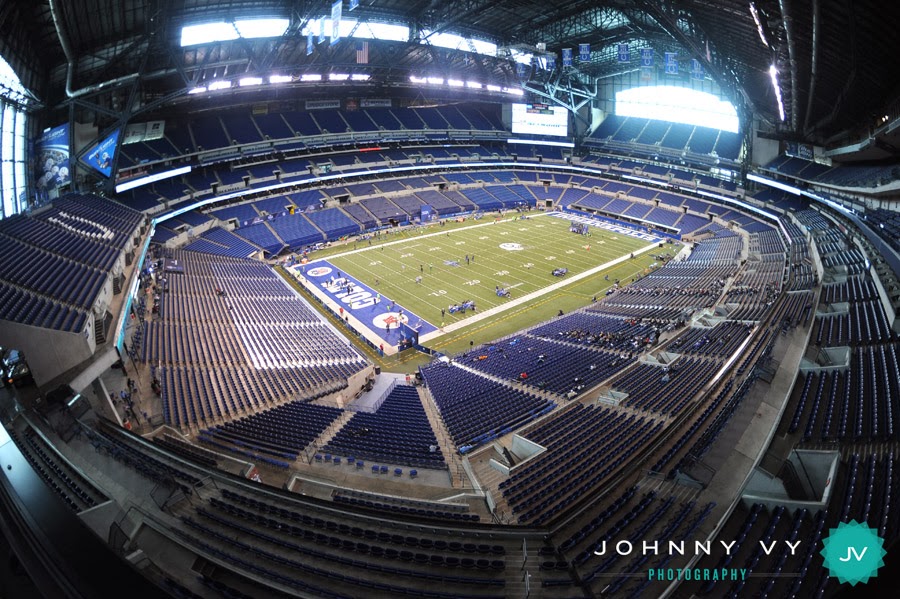 Hope you liked the pics!  For even more photos, check out NFL.com's gallery of the 2014 Scouting Combine, and their Top 10 photos gallery.  Until next year!